Do you suffer from a Vitamin D (as in Deservingness) deficiency? Your weight loss goal requires a genuine feeling of confidence, self love and self worth to fuel it.

What if you had unlimited self love and confidence to be able to achieve any goal?

What if you never criticized or negatively judged yourself again? What would be possible then?

Hint: Even a small shift in consciousness can bring about a lasting real result.

(Refresh your screen if the player does not appear.)

Listen in as my colleague, Bill Woods and I talk about EFT Weight Loss Coaching, and do a EFT weight loss coaching live demonstration. This coaching demo shows how EFT can be used to discover the issues that need to be worked on, and how to stop sabotaging yourself when you get close to the goal.

In this session, our volunteer works on fear of success, fear of failure, anger with herself for not moving forward and identity issues, such as "who am I without all this extra weight?" Lots of issues were clearly identified in this mini-session and our volunteer knows exactly how to take that one step forward, and what she still needs to work on.

If you don't see the player below, refresh your screen.

Want to make it EASY to lose weight? Z Point is just the ticket!

The Z Point and EFT for Weight Loss Teleseminar starts August 15th and runs for 3 weeks.

And it includes my EFT and Z Point CD for Weight Loss – free shipping too! (Note: international students get downloadable version.)

Here’s the description of the class:

Class #3 — EFT  and Z Point Together to Amplify Your Results –

Do you struggle with addictions?

Can your addictions be cured?

Has the 12-step model failed for you?

In our last show, we talked about using EFT for food addictions. The truth is – if you are fighting with 1 addiction, you are probably struggling with other addictions too.

Join me and my guest, addictions specialist Bill Woods, to discuss new treatments for addictions, and how EFT and coaching can be used to augment addictions treatment.

If you don't see the player below, refresh your screen.

There are new EFT tutorials and videos to explore. Excellent! Learn from the founder and creator of EFT!

Gary has created a new, unique version of EFT with Tutorials and Videos for what he now calls “Official EFT” —>

The need to please other people can leave you feeling chronically exhausted, angry and resentful. In this article, Dr. Carol Solomon, specializing in using EFT for weight loss, shows how to use EFT to uncover core issues related to the links between overeating, being overweight, the need to please others and the impact on one’s own self esteem.

EFT, Overeating And The Need To Please

Mary had been having difficulty controlling her urges to eat sweets. When I asked her what was going on in her life recently, she said she was preparing for an upcoming trip. Mary had a bad knee and her husband had signed her up for some walking tours when they got to their destination.

When we examined the emotions behind this event, they centered on several themes:

END_OF_DOCUMENT_TOKEN_TO_BE_REPLACED

Would you like to learn how to soothe your insatiable sweet tooth?

Do you have an unhealthy relationship with sugar?

Join me and my guest, Stacey Vornbrock, to learn why addictive substances like sugar are so hard to give up, and how to use EFT tapping to clear the addiction to sugar.

In this session, you can tap along to the exact protocol Stacey uses to clear the addiction to sugar once and for all.

Carol Solomon, Ph.D. MCC, is a Psychologist, Master Certified Coach and Certified EFT Practitioner. She is one of the world’s leading experts in using Emotional Freedom Techniques (EFT) for weight loss. She is the author of How To Stop Food Cravings and Lose Weight With EFT, the EFT Tips newsletter, the and the EFT Weight Loss CD.

Stacey Vornbrock, M.S., LPC, is pioneering the use of Emotional Freedom Techniques (EFT) with elite and amateur athletes to release mental, emotional, physical, and mechanical blocks on the cellular level.

She is the author of nine EFT Breakthrough Performance Sports Manuals and four e-books – Body Recovery, Injury Recovery, Travel Recovery, and Coming Back to Balance. (

If player does not appear, refresh your screen.)

Here’s what EFT Founder, Gary Craig said about this case:

Carol Solomon’s client learned EFT at Carol’s weight loss teleclass and then applied it to herself during a harrowing mountain driving experience. The result? No more driving fear. Note the very simple, straightforward language used.

“Sara” did not learn to drive until she was 22 years old. She only learned then because she was pregnant with her first child, and she knew she would be stuck at home if she didn’t learn to drive.

Because she didn’t learn in adolescence, Sara was very anxious right from the beginning, and has never been a confident driver. Certain weather conditions would cause her anxiety to increase. She would avoid driving in rain or snow. Driving in unfamiliar territory would also increase her anxiety. When she had to drive in these conditions, Sara would feel queasy and sick to her stomach. Her heart would race, and she would breathe hard or hold her breath. She would feel shaky and tense.

Two years ago, Sara attended a conference, which was held on a mountain top in upstate New York. On the way to the conference center, it began to snow and sleet. She was anxious but doing ok, until she got almost to the top of the mountain, and there was a car that was stopped ahead of her. There was no way to get around it. She had to stop and her car slid back against a guard rail. The car above her slid back into her car, and they were stuck on the mountain for a couple of hours. She was even more afraid to drive following this incident.

Sara’s anxiety came to a head when she and her husband purchased a summer home, located on a mountain in Vermont. The road to their new home was dirt packed and full of twists and turns, with no guard rails. Sara was particularly scared that if she slid off the road, there would be nothing to stop her from rolling down the mountain. She was anxious even as a passenger on that road.

She could not avoid it. She was moving to Vermont for the summer with her husband, and she had to drive. On the night before the trip, she had nightmares of going off the side of the road.

Sara was panic stricken. Since she had learned EFT in my weight loss teleclass, she announced to her husband that she was going to stop and tap before she drove up the mountain.

Here are the statements she used:

Even though I am very afraid to drive on this mountain road, I fully love and accept myself.

Even though I feel sick to my stomach and I feel shaky, I know I can be calm and drive well.

Sara drove confidently up the mountain. “I wasn’t holding my breath. I wasn’t breathing hard. I was not shaking. I was fine. I felt victorious as I pulled into the driveway!”

She continued to use EFT several times when she was going up or coming down the mountain. It’s been 7 months since she conquered her 40-year driving phobia. “Now I drive that mountain like I own it!”

I have an amazing video to share with you today. As Bob Proctor says in the film The Tapping Solution "People are starting to understand themselves as an energy field. And the fact that they can work with it to get the results they want."

And these experts aren't just saying they support EFT, they're saying that they use it on a regular basis and have had results with it. 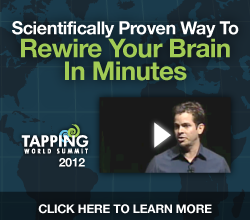 This video goes deep into a technique that has been scientifically proven to change the brain, literally re-wiring it, to both eliminate unwanted negative traits, emotions and beliefs and enhance positive ones.

And that’s that people have similar patterns and that the #1 thing that all people want, and that I know you want, is to be emotionally fulfilled.

Think about it for a second…if you want to be healthier and lose weight it’s because of how it will make you feel.

And if you want to be more financially successful, isn’t it really because of how you would feel being able to do whatever you wanted with financial freedom?

Wouldn’t you feel better if you had the choice to be able to travel, have a nicer home and nicer car and to be able to contribute more financially in helping others?

I could ask questions like this about your life on a number of different areas and I know I’d get the same response…we as humans do things to make us feel better and to be more emotionally fulfilled.

So the important question is…how do you get to have more of what you want and have more emotional fulfillment?

The video on the page will show you how.

To your emotional fulfillment, you deserve it, (even if you don’t think you do.)

P.S. – The technique shown in this video was shown, in clinical tests, to reduce negative emotions like stress, anxiety, overwhelm and much more:

Execute this advice and see results (almost) right away.
100% Free